[Originally published by The International Association of Art Critics]

Tracey Emin and Amy Winehouse: What’s Love Got to Do with It?

“I realized that there was a greater idea of creativity…

I realized if I was going to make art, it couldn’t be about a fucking picture… it had to be about where it was really coming from.”

In this age of howling — and tweeted — confessions, the culturati want to smell blood before they show up. The current longing for emotional disclosure gives apostles of tradition ironclad proof that a glorious past has given way to a coarse present. Many of the more harsh examples of artistic and emotional stripteases have hailed from London. Apparently the largest city in the EU acts as an Über Muse capable of spawning a delicious species of what most people call “crazy.” Specifically, Amy Winehouse and Tracey Emin give everyone plenty to praise or blame. Whether their work is perceived as cultural Armageddon or a braver new world depends upon how well we tolerate a reshaping of what constitutes beauty.

Tracey Emin’s work, “My Bed,” exhibited at the Tate in 1999, is still capable of setting a land-speed record for invoking invectives. When it was short-listed for the Turner Prize, it was both hallowed and scorned. Charles Saatchi bought it for £150,000 amid media scoffing and vitriol, and it has since become a litmus test for determining how people react to controversial artists and their work. “My Bed” is replete with bodily secretions, booze bottles, cigarette butts, used condoms, menstrual blood and, generally, the remnants of a life lived in a state of furious déshabille. Not surprisingly, the work was met with shock and a sense of violated decorum. That’s a predictable reaction, especially since interviews with Emin are unhinged, and scoffers are likely to see them as proof of a botched sense of societal norms and aesthetic sensibility. She was caught in a cage with media jackals and, ironically, she was damned for delivering precisely the juicy footage they love best.

When Amy Winehouse was found dead in her expensive London digs, the ensuing headlines made everyone nod their heads in solemn agreement that she was the real deal — damaged goods extraordinaire. Images of Winehouse ravaged by crack, liquor, bad relationships and sporting a black hole in lieu of an incisor made many folks rest more comfortably with their notion that England should still conjure images of Sussex landscapes instead of tattooed female bodies. However, if their curiosity was sufficiently piqued, they might finally have resorted to watching her do what she was obviously born to do — sing. It’s easy to uncover an endless string of online videos of her performing both her own music and jazz classics. Her version of Dinah Washington’s “Teach Me Tonight” is slurred, nuanced and gorgeous.

Like Emin, “Amy Wino,” as she was dubbed in the tabloids, was obviously deeply injured and had no compunction about sharing the human spoils of loss and damage onstage. Her music was never a straightforward effort to sell records. Instead, it was — and remains — a public display of self-inflicted evisceration. While drugs had a corrosive effect on her psyche, she managed to mature vocally in ways that are almost too intense to watch. Newsweek aptly summed up her appeal as “a perfect storm of sex kitten, raw talent and poor impulse control.”  Her song “Valerie” can begin to feel like a breathtaking form of voyeurism — and it can also offer a vector into the equally disquieting work of Emin.

Both women lure us into a space of emotional generosity that shows us the margins and the hot-white center of vulnerability. Even as they’re derided for their slutty behavior, they deliver a wildly authentic form of womanly selflessness. We’re even made to believe the enigmatic yin factor can heal every form of indiscretion. This feat is made all the more convincing because it’s accomplished with shockingly personal candor. After all, what’s more feminine — or vulnerable — than publicly declaring, “Love is What You Want”?  While that was a title Emin chose for her work, it just as easily could have been the enduring Winehouse mantra. The latter perceived love as both the trouble and the solution and, ultimately, it may have proved to be an even more dangerous demon than drugs. It’s both the fuel and the fire and, if we’re worth our salt, we’ve all been made nuts by it.

While this erotic mojo hardly sums up any kingdom sane people would long for, it’s nonetheless a universally understood plumb line that sets us up for Emin’s exercises in self-disclosure. Her splayed crotches are excursions into the fecund messiness of the female body. She sends the more commonly celebrated forms of feminine lusciousness packing and her visuals launch us into the luridly unsettling consequences of sex. She makes images of frenetic-looking pubic hair and excretions and, paradoxically, tops them off with wispy, trailing verbiage that intimates monumental vulnerability. “Terribly Wrong” is one example. It’s a monoprint depicting a nude female body in the throes (one assumes) of a miscarriage. Scratchy lines delineate sprawled legs and the focal point is a spilling vagina. A childish scrawl wraps around the body. “SOMETHINGS WRONG” [sic] is spelled out with “Terribly Wrong” above it in reverse script. The whole arrangement becomes a plangent psychological din. The parlance and penmanship of a grade-school girl looping around a tortured body is an ideal place for the psychic axle to snap — and it does. The scene offers less consolation than the floor of a bus station bathroom. It’s ghastly. But it’s also as wickedly straightforward as a crying jag or a menstrual cycle. This is the flipside of a glossy centerfold. And what makes it grand is its candor and the way it breaks us. 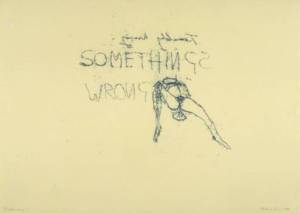 Emin’s verse and drawing come together to give us an image of femininity that has never been so deeply explored. Like Winehouse’s careening binges, her work is sometimes not so easy on the eyes — or noggin. Both artists haul us into Anti-Barbie Land where few people go willingly. And that’s a shame because it’s the richest kind of terrain. It encompasses the requisite sexy trophy wives and girlfriends and mommies — but also holds court for pole dancers and “bad girls.” Her art shows us that the “truly feminine” is many things, but “simple” is not one of them. In fact, both Winehouse and Emin accomplish this feat in a crazily maimed way that’s hard to ignore. It’s the ultimate female train wreck and it’s “pay per view.” The cost isn’t dollars; it’s emotional stress. But who can resist? This would seem a mere articulation of the obvious — unless you look at some online reactions to the work and life of both women. The controversy they conjure incites raucous cries from every notch on the spectrum. Everyone from virginal debutantes (perhaps an oxymoron) to advocates for outré artistic license voices an opinion. However, the comments suggest that most people demand that women keep their “secrets.” It’s all right if they’re wounded but their lives should remain private moments of episodic grief. It’s not the kind of information one should expose and it’s certainly not anything to be celebrated.

Tracey Emin has said, “I work with what I know. But it goes beyond that. I start with myself but end up with the universe.” This seems to be a thoroughly contemporary iteration of Romanticism and Wordsworth’s definition of poetry as “emotion recollected in tranquility.” When she was asked to create a curriculum vitae, she once produced her biographical information in the form of an embroidered work. It included details of abortions, childhood trauma and every form of anguish one can — and can’t — imagine. Interestingly, Emin’s father had a second family and, similarly, Winehouse’s father had an “office wife” who was openly acknowledged in their home. The suffering caused by his infidelity is memorialized in her song, “What is it About Men?” No doubt there are more egregious cases of dysfunction, but I doubt we could bear to hear about them. The only thing that saves all of us is the alchemical reworking of the “mess.” The pain becomes bearable when it’s transmuted into a drawing, a video, a photograph, an infamous tent pitched at the White Cube — or a song.

As Emin put it, “Art has always been… a mysterious coded language. And I’m just not a coded person; I wear my heart on my sleeve if you like. What you see is what I am.” Thank goodness. Her willingness to address every conceivable aspect of what is typically a “private” sphere has made her a thrilling force with which we’d be wise to come to terms. Even photographs of her are difficult to view. Her eyes staring back from framed images make us long to look away. But surely we must know better. Why miss out on the genesis of art? And why turn away from so much beauty? Like Winehouse, Emin offers us a chance to see precisely where art comes from. It’s a sacred space that’s certainly a privilege to enter. To abandon the opportunity would surely make cowards of us. And, besides, it’s clear they’re ladies. It’s fitting that we rise to the occasion. After all, love really does have everything to do with it.

It is with pleasure that I thank the Goss-Michael Foundation for their generosity in allowing me to view works by many YBAs, including Tracey Emin. They are a spectacular asset to Dallas and a tremendous source for education and understanding. For their presence in the city
I call “home,” I am grateful.

I am also supremely indebted to Suzanne Muchnic, a kind and generous mentor who has brought both insight and good cheer that will outlast our time of working together. She has proven herself to be indefatigably patient and kind.

Patricia Mora is a writer and designer living in Dallas who was educated in the U. S. and abroad. She has done work for Fortune 500 companies and published work in The Dallas Morning News, Humanities magazine, FD, and Paper City. Additionally, she was selected as a participant in the Capital Campaign Fund/Warhol Foundation workshop and her work was published by The International Association of Art Critics. She may be reached at: patriciamora@mac.com View all posts by patriciamora